Sunday evening saw The Hallé, internationally renowned orchestra based in Manchester, take the audience at Sheffield City Hall through a programme featuring music by some of the Americas’ great classical composers: Gershwin, Copland, Bernstein, and Ginastera. The orchestra were conducted on this evening by Sir Mark Elder, the Hallé’s music director of fourteen years. A pre-concert talk was given by Dr Sophie Redfern, expert in Bernstein and Copland ballet music, in conversation with the BBC’s Trisha Cooper. Sadly, I was not able to be present for the talk, though several audience members commented afterwards that it was an enjoyable and informative introduction to the evening, with Dr Redfern providing fascinating insights concerning the works and the composers.

Elder supplemented Dr Redfern’s perceptive commentary with his own introduction to both Bernstein’s Wonderful Town overture, and Ginastera’s Harp Concerto. With enthusiasm, Elder placed the pieces in context of the composers’ ouvres and in the broader context of their genres, and highlighted musical features which we might enjoy listening out for.

I found the first half of the programme absolutely invigorating, primarily because of the Ginastera concerto. The Bernstein overture was enjoyable, if played slightly straight, and the Copland Rodeo: Dance Episodes reared between boisterous energy and a sense of introverted melancholy. I particularly enjoyed the latter work as it was easy to imagine the narrative from the ballet, Rodeo, for which the music was composed. Information concerning both the music’s evolution from ballet to the concert hall and Copland’s preeminence in the creation of a distinctly American style of classical music was provided in the thorough programme notes.

Ginastera’s Harp Concerto was the real highpoint of the evening. Soloist Marie Leenhardt was by turns unrelenting, violent, delicate, hesitant, but captivating throughout. My seat near the stage allowed an intimate view of Leenhardt’s highly physical performance of a score which utilises dramatic techniques for the harp, such as drumming dance rhythms on the sounding board and making glissandi with the nails rather than the flesh of the finger tips. The acoustic where I was sat was brilliant; in quieter moments, such as during the surreal, dream-like second movement, the harp notes had space and time to resonate. The orchestra were kept successfully ‘under’ the harp throughout, and they engaged melodically and texturally with the harp in varying ways so that at times the harp passages were distinct and dominating, and at other times the harp ebbed away to allow the orchestra into the foreground. 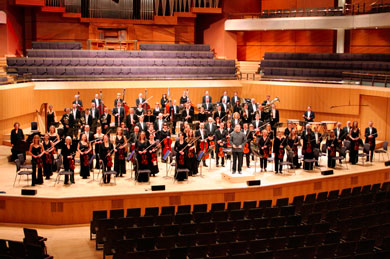 The orchestra in Nottingham, 2009

The second half seemed more restrained in comparison to the first. There were moments of real exuberance from the orchestra in Symphonic Dancesfrom West Side Story, such as in the ‘Mambo’ and in the ‘Cool’ Fugue sections of the piece. However, a more high-octane level of energy could have made this piece of emotional extremes even more exciting and overwhelming. Gershwin’s An American in Paris was charming and entertaining, and the brass, woodwind, and percussion sections of the orchestra certainly shone in this.

Overall, this was a highly enjoyable evening, seemingly for the orchestra as well as for the audience, judging by moments when players smiled and gestured to each other, or expressed their appreciation of the music by dancing slightly in their seats. Sir Mark Elder was sinuous and animated in his movements as conductor, and his sincere and often subtle physicality led us through a syncopated, jazz-infused, at times dissonant, highly emotive evening of music. 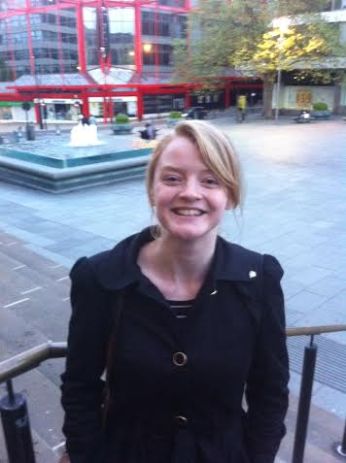