Sunday evening saw The Hallé, internationally renowned orchestra based in Manchester, take the audience at Sheffield City Hall through a programme featuring music by some of the Americas’ great classical composers: Gershwin, Copland, Bernstein, and Ginastera. The orchestra were conducted on this evening by Sir Mark Elder, the Hallé’s music director of fourteen years. A pre-concert talk was given by Dr Sophie Redfern, expert in Bernstein and Copland ballet music, in conversation with the BBC’s Trisha Cooper. Sadly, I was not able to be present for the talk, though several audience members commented afterwards that it was an enjoyable and informative introduction to the evening, with Dr Redfern providing fascinating insights concerning the works and the composers.

Elder supplemented Dr Redfern’s perceptive commentary with his own introduction to both Bernstein’s Wonderful Town overture, and Ginastera’s Harp Concerto. With enthusiasm, Elder placed the pieces in context of the composers’ ouvres and in the broader context of their genres, and highlighted musical features which we might enjoy listening out for.

I found the first half of the programme absolutely invigorating, primarily because of the Ginastera concerto. The Bernstein overture was enjoyable, if played slightly straight, and the Copland Rodeo: Dance Episodes reared between boisterous energy and a sense of introverted melancholy. I particularly enjoyed the latter work as it was easy to imagine the narrative from the ballet, Rodeo, for which the music was composed. Information concerning both the music’s evolution from ballet to the concert hall and Copland’s preeminence in the creation of a distinctly American style of classical music was provided in the thorough programme notes.

Ginastera’s Harp Concerto was the real highpoint of the evening. Soloist Marie Leenhardt was by turns unrelenting, violent, delicate, hesitant, but captivating throughout. My seat near the stage allowed an intimate view of Leenhardt’s highly physical performance of a score which utilises dramatic techniques for the harp, such as drumming dance rhythms on the sounding board and making glissandi with the nails rather than the flesh of the finger tips. The acoustic where I was sat was brilliant; in quieter moments, such as during the surreal, dream-like second movement, the harp notes had space and time to resonate. The orchestra were kept successfully ‘under’ the harp throughout, and they engaged melodically and texturally with the harp in varying ways so that at times the harp passages were distinct and dominating, and at other times the harp ebbed away to allow the orchestra into the foreground.

The orchestra in Nottingham, 2009

The second half seemed more restrained in comparison to the first. There were moments of real exuberance from the orchestra in Symphonic Dancesfrom West Side Story, such as in the ‘Mambo’ and in the ‘Cool’ Fugue sections of the piece. However, a more high-octane level of energy could have made this piece of emotional extremes even more exciting and overwhelming. Gershwin’s An American in Paris was charming and entertaining, and the brass, woodwind, and percussion sections of the orchestra certainly shone in this.

Overall, this was a highly enjoyable evening, seemingly for the orchestra as well as for the audience, judging by moments when players smiled and gestured to each other, or expressed their appreciation of the music by dancing slightly in their seats. Sir Mark Elder was sinuous and animated in his movements as conductor, and his sincere and often subtle physicality led us through a syncopated, jazz-infused, at times dissonant, highly emotive evening of music.

A rumination on the relationships between sound, geography, musical heritage and cultural belonging in Sheffield and South Yorkshire

That’s what I read on my program as I stood in the cavernous space of S1 Art Studio last Thursday. At one end of the room was a makeshift stage with a smattering of music stands on it. Before the stage was a table, which propped up an array of alien and slightly ominous electronic equipment. I had been invited to the evening’s event, A Long Walk to Grimethorpe, by local arts platform, Hand Of Sheffield. The description of the event on their flyers was a little clearer – ‘a performance for brass band, sound recordings and film’ – but still lent an air of mystery to the night.

The crowd filtered in and the lights dimmed. Louise Snape, founder of Hand Of Sheffield, described the evening’s program in a little more detail. The second half of the program would feature a musical composition written by her brother, aspiring electronic musician, Joe Snape. But first we would be treated to a documentary exploring Snape’s composition and its wider context. 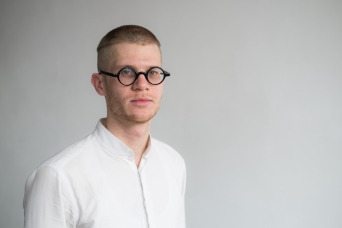 The documentary was projected onto the white expanse of wall behind the stage. In the film, Snape told us of his lifelong affinity for brass music, and how he intended to search for creative stimulus in the 20 mile journey from Sheffield to Grimethorpe – the Mecca of brass music. But in a twist, he planned to complete the journey whilst wearing a tuba stuffed with microphones. If he pointed the bell of the tuba at whatever was making noise, the microphones inside would pick up and record the sound.

Interspersed with scenes of Snape awkwardly lugging his tuba over wooden stiles, or crouching low, aiming the bell of his tuba at a bubbling stream, were interviews with long-time brass band members. The interviews were invaluable: the scions of brass laid out the history of brass bands in Yorkshire, commented on the current state of brass music, and – in one particular gem – informed us of the brief burst of popularity brass music received after the film Brassed Off was released.

Director Ismar Badzic deserves credit for the way the documentary was shot: light hearted, comedic and without a whiff of pretentiousness. It was the right approach, reflecting the modest origins of brass music, and successfully countered the highly conceptual nature of Snape’s composition. In his interviews, Snape never strayed into complicated in vague terms – he was reassuringly straight-talking.

I spoke to Snape on the phone the next day. I asked him which was his favourite sound that he recorded.

His answer was the noise of an aeroplane flying overhead. In the opening stages of the composition – which began after a boozy interval – a whine crescendoed into a tumultuous roar, combined with thunderous chords from the University of Sheffield Brass Band, who were up on stage. The sound really stood out to me as well; if I hadn’t have been told afterwards, I never would have guessed that it was the noise of an aeroplane – albeit electronically manipulated.

Conductor Greg Waters with the University of Sheffield Brass Band

Another memorable section of the composition was when the brass band played regular staccato notes over the sound of drizzling rain. Snape discovered that one of the side effects from rigging his tuba with microphones was that they recorded the rhythm of his walk. The ‘thump’ of the brass managed to capture the repetitive nature of the hike, and evoked the long stretches of field which Snape summed up for me as ‘monotonous’.

But the composition wasn’t monotonous. Anything but. At times, it produced a meditative, rocking quality – as with the staccato notes.  At other times, the soaring ambient tones reminded me of the enormity of the terrain around Yorkshire.

The indefatigable Louise Snape deserves merit for her contribution towards the event. Hand Of Sheffield managed to pull off a seamless and entertaining evening. I walked home that night, mulling over the relationship between brass music and the rugged Yorkshire landscape. 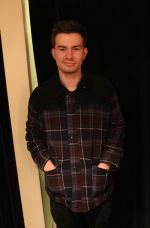 In the context of this blog, the Easter holidays were rather ill-timed.

The blog had only just been born, when I rushed home to celebrate the Easter holidays with my friends and family. And although it was relaxing – I don’t think I’ve drunk more cups of tea in my life – I could feel the crackling energy of Sheffield pulling me back from the sleepy little town I grew up in.

There’s one particular treat to look forward to this week: The University of Sheffield’s production of West Side Story!

The brave society that have chosen to stage this notoriously complex work by Leonard Bernstein are SUPAS, who have a long history of putting on a wide range of musicals at the university. There’s no doubt in my mind, though, that West Side Story is the most ambitious work the society has ever staged, so I’m particularly looking forward to it.

The musical is running from April 30th – May 3rd, 7.30pm at the University Drama Studio on Glossop Road.

In the meantime (before the review goes up) here’s a little snippet of one of my favourite local bands, Screaming Maldini.

The band have recently finished a 10 day tour in Japan, and will soon be back gigging in Sheffield. Take a listen to their new track, Abyssinia