Phew – what a week for shows! First of all there was Matthew Malone’s wonderful revival of the musical Subways are for Sleeping, and then there was the phenomenal production of West Side Story by SUPAS. 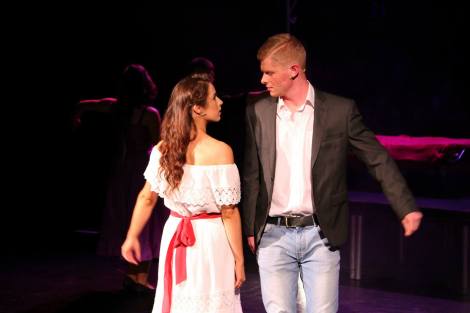 Amy Joyce as Maria and Ryan Bray as Tony

On the walk to the University Drama Studio, I was a little apprehensive. After all, West Side Story is a notoriously difficult musical to pull off. The music – composed by Leonard Bernstein – is fiendishly complicated: it fuses traditional orchestral, jazz, and Latin American Music, which results in a jarring score loaded with irregular time signatures. It requires a colossal orchestra to perform (an issue in the relatively small space of the Drama Studio) and provides a stiff test for the singers. The musical – a 1950’s retelling of Romeo and Juliet set in New York – is a sprawling tale of love and death. The question of accents (a melting pot of Puerto Rican and those of New York) and the lofty standards of choreography set by the original film only provide further pitfalls in staging the show.

Luckily, this SUPAS production leaped gracefully over these obstacles. Director Hamish Ellis, Musical Director Timothy Walker, and the rest of the backstage crew clearly weren’t naïve about the complexities of the musical. Each line, dance, and song, was delivered with such confidence that it is obvious that any niggling issues were ironed out during a lengthy rehearsal process.

Ryan Bray and Amy Joyce were apt choices for the leads, Tony and Maria, respectively. The chemistry between the two was palpable, and Bray’s voice had a deep, sonorous quality to it, while Joyce flitted easily between moments of comic innocence and emotional weight.

The supporting (and more fun) roles of Anita and Riff were played by Naomi Bailey and Matt McGoldrick. Bailey’s portrayal of Anita was raunchy and bursting with energy, while McGoldrick captured the role of riff with the violent intensity that was required. In respect to this, it’s clear that all the guys in the musical relished the opportunity to play the tough members of rival gangs, The Jets and The Sharks. Every action was performed with chest-beating gusto and frenetic energy. Each time they threw themselves across the stage – perhaps during a dance or a fight – I felt a wave of disgust surge through me as I realized how comparatively unfit I was. 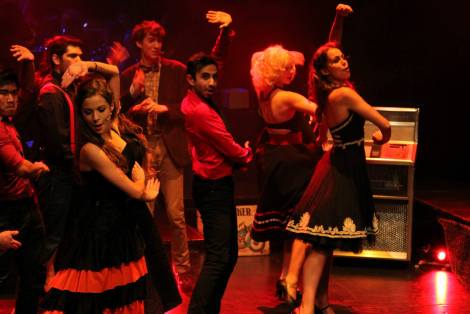 The Sharks with Naomi Bailey as Anita furthest right

Kudos have to be awarded to Musical Director Timothy Walker and the rest of the orchestra. I could practically hear the stage groaning under the weight of what was possibly the largest band ever to grace the stage of the Drama Studio. The orchestra captured the spiky jazz of the show splendidly, and never once overpowered the singers on stage. The fact that Walker managed to shape them into a single, cohesive unit, responsive to his every gesture, is a testament to his ability as an MD and conductor.

West Side Story was without doubt the most ambitious work SUPAS has ever staged. With good reason, I was fearful of a catastrophe, but there was no need – the show delivered on all fronts. After the curtain came down, there was a palpable sense of awe in the face of the greatest show that the society has ever produced.

1 thought on “West Side Story by SUPAS: Review”